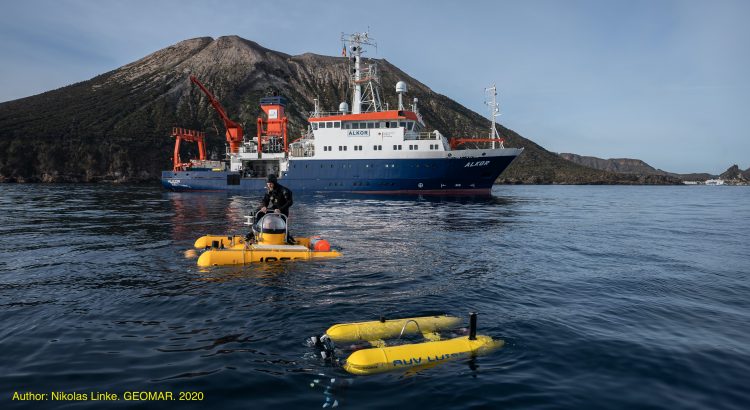 One of the current users of our vehicles is GEOMAR Helmholtz Centre for Ocean Research Kiel, a world-wide leading institute of marine research based in Kiel (Germany). GEOMAR incorporated two Girona 500 vehicles to its high-performance infrastructure in underwater robotics, to be used in different research fields related to marine sciences.

Recently, the team did an expedition to the Aeolian Islands, a volcanological active area of special interest for the geoscientists located in the Tyrrhenian sea (southern west Italy). The German research ship FS ALKOR was used to test the two Girona 500 vehicles (ANTON and LUISE) along with the submersible JAGO in investigations around the Vulcano and Stromboli volcanoes.

The goal of the mission was to study an analyze the possibilities of cooperation between vehicles in different terrains, from flat areas to rocky slopes. The scenario was ideal to test the lighting system developed by GEOMAR and integrated in the payload area of the LUISE AUV. In total, 11 dives where performed with JAGO, ANTON and LUISE.

The payload that has been developed by GEOMAR AUV team for LUISE AUV is a camera system CoraMo Mark 2 and it contains an IDS machine vision camera with 12 MP. The team has also developed a forward-looking version prepared for a mid water ecology project to photograph animals in the water column.