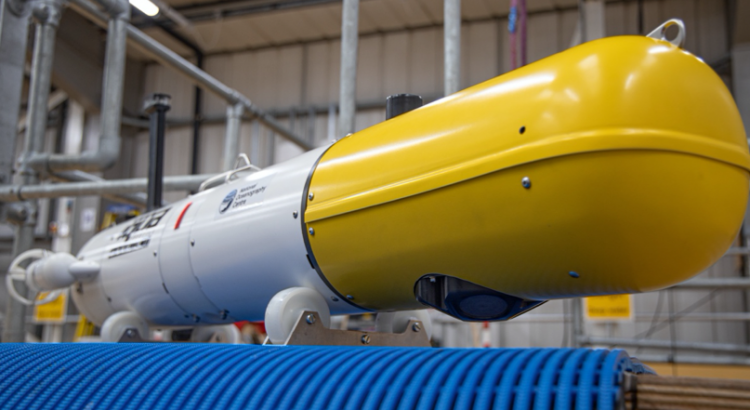 National Oceanography Centre (NOC) is the United Kingdom’s centre of excellence for oceanographic sciences. Back in 2018, NOC team chose IQUA’s SPARUS II platform to become a test bed for new developments that may be later transferred to other vehicles in their fleet. The team picked this AUV for its versatility, its ROS driven software and its possibilities for sensors integration.

In this case, NOC team has closely worked with Sonardyne, a global provider of underwater acoustic, inertial, optical and sonar technology.  As part of the launch activities for SPRINT-Nav Mini Sonardyne installed its 300 m-rated SPRINT-Nav Mini into IQUA robotics’ 9” SPARUS II AUV, which was on loan to Sonardyne from the National Oceanography Centre (NOC). The SPRINT-Nav Mini is the world’s smallest hybrid acoustic-inertial navigator, combining DVL, inertial and depth in a single all-in-one solution ideally suited for smaller subsea vehicles.

The vehicle is used as an embedded development test bed by the NOC and is permanently equipped with a Sonardyne AvTrak 6 OEM Nano, which is housed inside the main SPARUS II payload hull. The AvTrak 6 OEM Nano allows the NOC to efficiently and simultaneously track, send position updates and exchange data with the SPARUS II vehicle, using a Ranger 2 Ultra-Short BaseLine Positioning system and Sonardyne’s Marine Robotics pack.

The team at NOC regularly works with Sonardyne and IQUA to integrate systems into the robot operating system (ROS) architecture that is being rolled out across its fleet of AUVs. This has recently involved the integration of SPRINT-Nav, AvTrak 6 and a NORBIT WBMS-FLS into their vehicle control system.

If you wish to use the article images you must quote ©Sonardyne International. Thank you.